GUTENBERG: HOW ONE MAN REMADE THE WORLD WITH WORDS by John Man 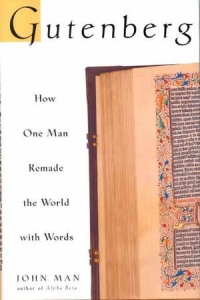 “Now the possibility existed of addressing directly anyone, anywhere — in theory, everyone who could read — if only they could be reached and spoken to persuasively.” (p. 256)

Man’s hypothesis in this book (and its companion, Alpha Beta: How 26 Letters Shaped the Western World) is that written communication has had four major “turning-points,” where it “flicked to a new level of speed and outreach.” The four turning-points are 1. the invention of writing itself, 2. the invention of the alphabet, 3. the invention of printing with movable type, 4. the coming of the Internet. In reading these books I started seeing parallels between the turning-points and realized that a solid predictor of the outcome of our current turning-point (the coming of the Internet) would be to study the outcomes of the others. The general pattern that emerged was an increase in individual empowerment —  writing empowered the elites who had time to master the craft; the alphabet empowered ordinary people by simplifying the craft; movable type empowered more people to publish their thoughts to a wider audience; and the Internet is empowering anyone with the courage to launch into cyber space.